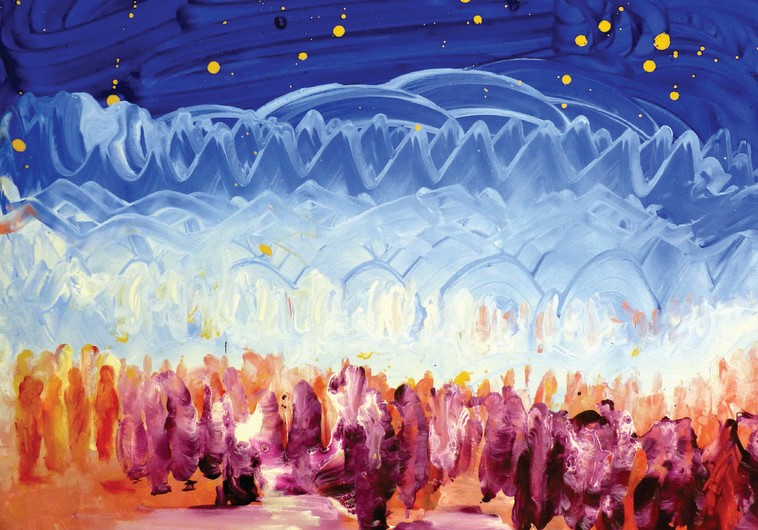 This week we begin the fifth and final book of the Torah, Devarim (“Words”).  In Devarim, Moshe Rabeinu addresses the Nation of Israel, giving three speeches before the Nation enters Eretz HaKadosh, the Holy Land of Israel.  For clarity on the meaning of the Nation of Israel and what it means to be a Jew, watch This Video by  Rabbi  Moshe Zeldman. These speeches include a review of the travel through the desert, repetition of mitzvot (laws) as well as some new mitzvot and a reminder that repentance can always bring the land of Israel back to the Jews.

This fifth book is different than the other four in which Moshe Rabeinu repeats the words of Hashem to the Jewish Nation. Rashi Hakadosh says (Megilla 31) that Moshe Rabeinu was a messenger of Hashem throughout the first four books of Torah, bringing Hashem’s messages to the people. The Lubavitcher Rebbe, Rabbi Menachem M. Schneerson states that in sefer (the book of) Devarim, Moshe Rabeinu  is speaking on his own, but united with the Shechina (the Divine Presence) of Hashem. Moshe Rabeinu is speaking in the first person, but in oneness with the Hashem. He has become nullified to the presence and the will of the Divine. The two unite and the Shechina and Moshe speak as one.
The Ramban says that In Devarim, Moshe Rabeinu is giving spiritual guidance to the generation about to inherit the land of Israel. Rabbi Tzadok Cable elaborates, saying that Moshe Rabeinu gives encouragement about unity and oneness in the form of a rebuke. In parshas Devarim, Moshe Rabeinu repeats the events of establishing a judicial system, the sin of the spies and the request of the tribes of Gad and Reuven to stay on the East of the Jordan River. Throughout these events there is a desire for separation. This is a continual temptation for Klal Yisral. The judicial system was happily accepted by the Jews because it brought the Nation a degree away from Moshe and the Torah received directly from Hashem. The spies who spied out Israel went because the Nation wanted to check the land, showing the desire to separate from Hashem’s will, were the land deemed unconquerable.  The tribes that wanted to stay on the east of the Jordan also wanted separation, to live at distance from the Bet Hamikdash that would be built in Jerusalem.
Moshe repeats these events because this desire that connects the three is an inner struggle that has followed the Jewish people since the birth of the Nation. Its root is within Klal Yisrael and within us. There is a reason for this desire for separation. Hashem gives us the experience of the self and access to free choice. The reason we feel this distance, separateness and sense of self is to encourage us to follow our source that leads us back to Hashem. Without this separation there would be no yearning for unity. We stay far from Hashem to maintain our sense of self, but in so doing we destroy ourselves and our potential unity. The sense of self is an illusion that separates us from Hashem but also draws us towards Him depending on how we use it. Moshe Rabeinu’s words as well as the entire Torah continue to be relevant in every generation. We must learn to nullify the self and break down the borders we experience in order to access the creative oneness in this world. “The point of rebuke in this weeks parsha rectifies the misappropriation of independence. We have misunderstood this aspect of physicality and separateness. ”
The Alter Rebbe, Rabbi Schneur Zalman of Liadi says in Shaar Hayichud Vehaemunah (Gates of Unity and Faith)there is a Divine life-force bringing everything into existence at each given moment. Were this force to end, each object would cease to exist. There is a constant creative energy that allows existence to take place, the creative energy of sustenance. What this means to me is that Hashem sends his continuous energy out into the world for us to decide what we want to do with it. In this parsha, Devarim, Moshe Rabeinu is urging us; use the energy for the good, recognize your downfalls and unite to save yourselves, to save the united body of energy that is Klal Yisrael.
May we hear the words of the Shechina through Moshe our Leader and may these words become a living Torah inside of us. May we work towards a tikun (fixing) of our continual national weaknesses and unite the energy of Hashem back to his infinite source, bringing the coming of Moshiach and the ultimate Geulah (redemption).

Thoughts were compiled from the Chumash as well as from Rabbi Yehouda Nachshoni, Rabbi Shlomo Katz, Chabad.org, Rabbi Tzadok Cable and Rabbi Schneur Zalman of Liadi. Thank you Rabbi Mendel Matusof for the teaching and clarity, thank you Shlomo Geller for editing!